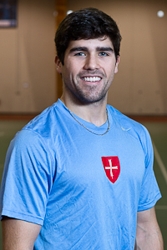 Alex Fulton (Class of 2012) is serious, committed to the life of the mind and a great athlete.

A senior lacrosse attackman and natural science major with a concentration in physics and math, Fulton chose St. John's University because it met his dual requirements -- intellectual and athletic. If offered the academic challenge he was looking for and it had a great lacrosse team.

His coach Derek Daehn reports that Fulton, a two-year captain, "…never misses practice, is a team leader on and off the field and has a tremendous work ethic."

During the past season, Fulton has scored 27 goals and 16 assists for 43 points.

St. John's took the Upper Midwest Lacrosse League (UMLL) Division II championship and lost in the quarterfinals to the University of Dayton. The Johnnies ended the seasons with an 8-2 conference record and a 15-5 overall record.

At Mahtomedi High School in Mahtomedi, Minn., Fulton was a three-year letter winner in hockey. He played small: "I used good positioning and making smart plays to keep away from the bigger guys." 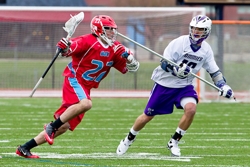 He was also a three-year lacrosse varsity member; making academic all-conference as a junior and senior.

Fulton began at St. John's as a pre-med student, changing to his current major in his sophomore year.

After graduation, Fulton is headed for graduate school in either mechanical or civil engineering, for which he feels well-prepared.

"I have had some really great teachers here like physics professors Sarah Yost, Dean Langley and Jim Crumley," Fulton said. "Jim laid out graduate packets for those who want to go on in engineering -- he has been very helpful. Theology professor Kim Belcher's class of God, Christ and the Sacraments was very interesting.

"However, the highlight of my undergraduate experience has been Kris Nairn in math. It’s really great when you have a teacher that you instantly relate to. I had her in multivariable calculus. She kept pushing me in class; she also was a great influence to go on to graduate school.

“I also appreciate the presence of the monks about campus and in the residence halls. A favorite of mine is Father Michael Kwatera, OSB. He is a FR in Patrick Hall and is always available to talk about spiritual aspects of life.”

For the second straight year, Fulton will serve as team captain for the Johnnies during the 2012 season.

-- John Taylor (SJU Class of '58) is a senior associate for institutional advancement at St. John's