Last year had everything St. John’s wanted in a lacrosse season.

Everything except a national championship. 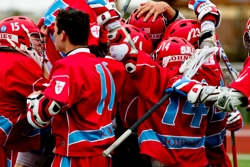 While the Johnnies captured the 2011 Upper Midwest Lacrosse League (UMLL) Division 2 title in a thrilling overtime game against the University of St. Thomas which sent St. John’s to the Men’s Collegiate Lacrosse Association (MCLA) National Tournament, the end of the season was cut short of its main goal.

“Obviously winning the UMLL title over St. Thomas was a great victory for the team,” St. John’s coach Derek Daehn said. “But I think we were left wanting more from our national tournament appearance.”

“Sure, the appearance streak is impressive but it’s somewhat bittersweet,” Daehn said. “We’re hoping to change that this year.”

Ready to get back to work, the Johnnies will start the 2012 season during the first week in March with a trio of tough games in Florida.

“We’re excited to start the season with a tough trip,” Daehn said. “We know that regardless of the games’ outcomes, we’ll know who we are as a team and what we’ll need to improve.”

Using the Florida trip’s results and continued practice, the Johnnies will head into UMLL conference play as well as additional out-of-conference matchups.

According to a poll with over 140 votes on SJULacrosse.com, North Dakota State University is St. John’s biggest rival besides St. Thomas. After losing 7-6 to North Dakota State (No. 10) during the regular season last year, the Johnnies responded by routing the Bison 16-5 in the 2011 UMLL playoffs. 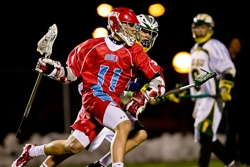 SJU attackman Jake Helmer (No. 11) scored four goals and added one assist in the Johnnies' 16-5 victory over North Dakota State University in the 2011 UMLL DII semifinals. Photo by Steve Sanner

“There was already some friction between the two teams before I came here,” Daehn said. “I think the past few years, North Dakota State has really developed as a team and our rivalry with them has developed as well.”

Combining the 2012 conference opener with the budding rivalry game, the Johnnies will battle North Dakota State University on Friday, March 23.

Along with North Dakota State, St. John’s will also face Bethel University, St. Olaf College and Carleton College in UMLL conference play. The scheduled Sunday, April 22 game against the University of Wisconsin - Eau Claire was cancelled with the Blugolds leaving the UMLL.

“It’s going to be a tough weekend,” Daehn said. “We’ve got plenty of time and plenty of games to get ready for those games and we’re looking forward to that trip.”

St. John’s will play Davenport on Saturday, March 31 and will face Missouri State on Sunday, April 1.

As always, all eyes are on what is arguably the best rivalry in the MCLA -- the annual Johnnie/Tommie matchup.

Slated to host the matchup, St. John’s will faceoff against St. Thomas (No. 2) on Saturday, April 14.

“We lost a great senior class last year but we gained a lot of awesome, talented freshmen,” Daehn said. “We’re going to challenge them with our tough schedule -- playing 12 games, three of those games against the No. 1, No. 2 and No. 3-ranked teams in last year’s final polls.

“I think it will prepare us to defend our UMLL title in the playoffs and help us make our best run for the national championship.”

Rankings shown are from final MCLA Rankings on May 24, 2011