What they found two hundred yards away was Dayton attackman Will McCormick on his back and in a daze.

Whistles blew amidst a raucous uproar of cheers and maledictions alike. McCormick made a mistake waiting for a groundball; he had put his head down. One St. John’s University midfielder made a bigger mistake; he hit McCormick -- hard.

Pictures and film of the penalized, infamous hit could immortalize the incident but the box score certainly does not. 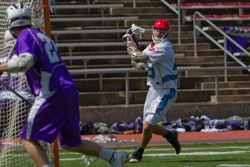 Yet far more exclamatory than his 2:00 penalty entry for the sinus-clearing collision with McCormick was the stat line for St. John's midfielder Tyler Safranek: five goals.

The Johnnie lacrosse program has built a great legacy since its inception. Since 2006, St. John's is one of two teams out of 116 total teams in MCLA Division II that boasts more than an .800 win percentage. The team has qualified for seven consecutive national tournaments, is regularly ranked in the top five in the nation and boasts multiple All-Americans on an annual basis.

However, if you try to find the last time a single Johnnie scored five goals against a ranked opponent, you won’t.

“Tyler is an exceptional player,” St. John’s coach Derek Daehn said. “He is a perfect example of what hard work, wall ball, and being a student of the game can do for a player. Tyler has come from a non-traditional lacrosse program and transformed himself into one of the best midfielders in the country.”

Safranek drew a lot of attention as he walked off the field following his illegal hit in the 2011 MCLA quarterfinal game against Dayton. Despite the volume midway through the third quarter, the rest of his performance spoke much louder. In the Johnnies’ 2012 campaign, it’s likely Safranek will be drawing a lot more.

A graduate of St. Cloud Cathedral High School and a product of a young lacrosse program, Safranek’s path to the forefront of St. John’s not only came sooner than anticipated but also was far from conventional. In addition, eventually it was a path that led to leading the Johnnie midfield in scoring as a junior.

Safranek showed up at St. John’s for football and he spent his first year of collegiate lacrosse playing defense. Not sticking to that script for long, Safranek dropped ‘football player’ from his résumé and traded his long defense pole his sophomore year and became a short stick midfielder.

Barely twelve months after his last day as a defenseman, Safranek was playing a significant role in the Johnniea' midfield corps. Only another year later, he tallied the game-tying goal and an assist in the final minutes of the 2011 UMLL DII Championship leading St. John’s in an overtime win over St. Thomas.

A few short weeks later, Safranek became the first the first St. John’s lacrosse player to score six goals in one game against the #6 team in the country at the MCLA National Tournament.

“Tyler’s career as a Johnnie will leave a lasting mark on the program,” Daehn said. “He has played almost every position on the field and does whatever the team needs to be successful.” 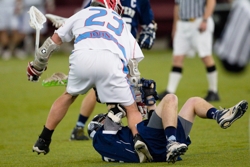 St. John's midfielder Tyler Safranek (No. 23) finishes a check during a 2010 game against Western Washington University. Photo by Steve Sanner

Despite his reputation from the hard hit, you will not find Safranek on any “most wanted” posters in Dayton, Ohio; nor will you find him lining up first-year Johnnies for hazing in their unsuspecting walk from the dorms to class at the Quadrangle.

Safranek is now a senior captain and he is taking both roles seriously. When he’s not doing the necessary work to finish his academics, he is directing traffic at the lacrosse team’s offseason captain’s practices or alone in the Donald McNeely Spectrum playing wall ball and hurling white blurs at 90 mph towards the cage, rehearsing for the season to come.

In the upcoming 2012 season, Safranek will be leading the St. John's squad in its trek for its first national championship. Until then, he’s content working to be even better and keeping his head down.