St. John's Lacrosse looks to rise above its tough competition in 2013

Heading into the 2013 season with National Championship aspirations, the St. John's University Lacrosse club announced its schedule for the upcoming season. 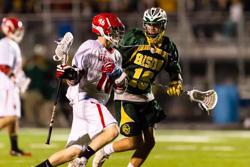 St. John's will travel to Chicago, Ill. for the games against Grand Valley State and Dayton on March 22 & 23, respectively.  The Johnnies fell to Dayton at the National Tournament last year and will look to avenge the lost which landed them as the No. 6-overall team in the country in the final 2012 MCLA Division II poll. 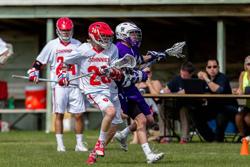 Miles Armitage (left) during the 2012 regular season victory over the University of St. Thomas. Photo by Steve Sanner

The annual Johnnie-Tommie matchup will occur on Saturday, April 6, at 7 p.m. at O'Shaughnessy Stadium in St. Paul, Minn. on the campus of the University of St. Thomas.  The rivalry game is expected to be one of the best MCLA Division II games during the season, as is tradition.

In total, the Johnnies will face seven of the top 25 teams from last season's Lacrosse Magazine final poll including four of the top 10 teams: