Off to a good start

Snow and cold temperatures couldn't keep St. John's University from getting off to a hot start for the 2013 season.

The Johnnies had a full schedule of games during the February 1-3 weekend against UMLC DI opponents -- the first time St. John's has played multiple DI preseason scrimmages.

"We were excited about the opportunity to scrimmage Division I teams from our conference," St. John's coach Derek Daehn said. "It was great to not only see where we are as a team at this point but also see how other teams are doing.  The scrimmages were extremely competitive but also a fun way to kick off the season." 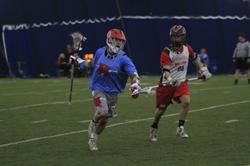 In the first scrimmage, the Johnnies defeated St. Cloud State University, 16-5 on Friday, February 1 at the Husky Dome.

"We got off to a somewhat slow start against St. Cloud State which was kind of expected with a young team in their first game," Daehn said. "But once our offense started clicking, we got on a roll."

Many of the Johnnies' goals were scored from strong dodges through the St. Cloud State defense and a solid performance from the St. John's defense helped seal the victory.

In just over 12 hours, the Johnnies traveled south to Dinkytown in Minneapolis for an afternoon battle against the University of Minnesota on Saturday, February 2. 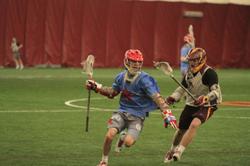 St. John's vs. University of Minnesota on Saturday, February 2. Photo by Tom Dube

After leading 12-9 heading into the fourth quarter, the Golden Gophers fought back to tie the game at 12-12 and due to a shortage in time, the game resulted in a draw.

"While we were disappointed to have surrendered the lead, overall I feel it was one of the best offensive outputs the Johnnies have produced in recent years," Daehn said. "Despite the game being a scrimmage, both teams played with high intensity.  I was pleased with the way we competed and I think that game will help us as we prepare for the regular season."

Capping of the weekend, the Johnnies played their third game in as many days taking on Minnesota State University-Mankato at the University of Minnesota Bubble on Sunday, February 3.

"It's safe to say we were a bit sluggish and it showed during the first quarter," Daehn said. "We were able to bounce back and our defense settled into the game in the second and third quarters."

With improvement on both sides of the ball, St. John's was able to finish the weekend with a 13-5 victory. 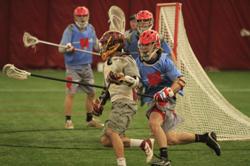 St. John's vs. University of Minnesota on Saturday, February 2. Photo by Tom Dube

"I'm excited with the results this weekend," Daehn said. "Of the 41 goals we scored, 13 of those goals were assisted which shows how well our offense played.

"The whole team played very well, we know what we need to improve on and we'll be ready for the regular season."

St. John's will travel to Belleville, Ill. to face Lindenwood University-Belleville for the 2013 regular season opener on Thursday, February 21, at 6 p.m.