St. John's Lacrosse is pleased to announce the hiring of Joe Nelson to its coaching staff effective immediately.

Nelson, a 2010 graduate of St. John's, will serve as a goaltender and offensive coach bringing both of his playing experiences to the table.

"Joe was a great goaltender when he first came to St. John's," St. John's head coach Derek Daehn said. "But the great thing about him was that he was skilled at basically every position on the field.  When he wasn't in-between the pipes, he was a very good midfielder for us.

"He'll bring that versatility and lacrosse IQ to our staff and pass that along to our players." 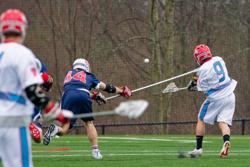 Joe Nelson (No. 9) unleashing a shot against Davenport University during a 2010 game. Photo by Steve Sanner

Nelson scored 52 career points (22 goals and 30 assists) as a midfielder with 45 of those points coming during his senior year, his only as a full-time midfielder.  He also owns a 21-3 record as a goaltender (149 total saves, 1.35 goals against average and a 0.696 save percentage) in his four years as a Johnnie.

Following his graduation, Nelson coached at the youth level within the Wayzata Lacrosse Association and also founded TC Metro Lacrosse -- a company that specializes in goaltender-centric clinics and camps for youth and high school level lacrosse players in Minnesota -- with St. John's Lacrosse alumnus Stu Van Ess (Class of 2010).

"We're excited for the impact that Joe will bring to the team," Daehn said. "He has a great overall knowledge of the game and it will also be great having a coach that can spend one-on-one time with our goaltenders."