With one of the craziest spring seasons St. John's has had weather-wise and the Upper Midwest Lacrosse Conference playoffs quickly approaching, the Johnnies were faced with quite the task.

Projected to be the No. 3-seed in this year's UMLC Tournament, St. John’s still had two conference games scheduled to prior to the end of the regular season.  One of those games -- against then-projected No. 2-seed, North Dakota State University -- carried massive implications as the game's winner would lock up the UMLC No. 2-seed.

“We knew we did not want to be stuck as the No. 3-seed because of not being able to play a full season,” St. John’s coach Derek Daehn said. “But with this weather we've been having we weren’t sure if we were going to be able to get the game in.”

In order to play the rescheduled game against North Dakota State, the call went out to the Johnnies’ entire roster to put in the effort needed to shovel the field at Clemens Stadium.

Working and shoveling together, the Johnnies cleared the field during the afternoon on Tuesday, April 23 prior to taking on the Bison later that night. 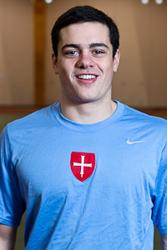 With the win, the Johnnies earned the No. 2-seed in the upcoming UMLC Tournament taking place April 26-28.

“Getting that No. 2-seed is extremely important,” Daehn said. “While it doesn’t help our match-up too much -- we still have to play (North Dakota State) again -- we get an extra day of rest which will come in handy after this busy week.”

St. John's will face the winner of the quarterfinal game between No. 3-seed North Dakota State and No. 6-seed St. Olaf in the second UMLC DII semifinal game at Concordia University on Saturday, April 27, at 1 p.m.

Should they win their semifinal game, the Johnnies will face the winner of the other UMLC DII semifinal game -- between the No. 1-seeded University of St. Thomas and either No. 4-seeded Bethel or No. 5-seeded Carleton -- in the UMLC DII Championship at Concordia University on Sunday, April 28, at 1 p.m.

Time-lapse video of the snow removal at Celmens Stadium in Collegeville, Minn. prior to St. John's Univeristy's game against North Dakota State University on Tuesday, April 23, 2013.

Check out the video of the snow removal on the SJU Football YouTube Channel!