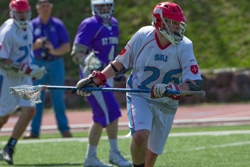 Anytime there is an athletic matchup between St. John’s University and the University of St. Thomas, each game, meet or match between the two schools provides excitement.

During those games, St. John’s alumni proudly don the Johnnie Red to support and cheer for their fellow Collegeville brethren.

This year’s Johnnie/Tommie lacrosse game on Friday, April 15, at St. Thomas Academy in Mendota Heights, Minn. will feature a hard-fought battle between two of the top teams in the nation as the currently second-ranked Tommies host the third-ranked Johnnies.

Why should you come to this year's Johnnie/Tommie game?

It’s the best rivalry in Minnesota.

And we need you this year, SJU Lacrosse alumni.

The Tommies have enjoyed recent success during the past three years, winning back-to-back National Championships and only losing twice since 2009.

However, one of those two losses came at the hands of St. John’s on Saturday, April 18, 2009, as the Johnnies defeated the Tommies 6-2 at St. Thomas.

Since then, the Tommies have managed to squeak out three straight wins against St. John’s.

What can you do to help end this atrocity?

Wear Johnnie Red and attend the Johnnie Alumni Player/Family Pregame Gathering at Champps in St. Paul before this year’s game.

Hosted by the Freeman’s and Kubovec’s, we have a room reserved for St. John’s alumni and fans only.

Please RSVP to the event on Facebook or by email to: