Finally, SJU Lacrosse has its coach

“I believe an outside perspective and change is healthy for a team from time to time to shake things up,” Daehn said.

It is safe to say he has the ability to do just that at Saint John’s.

When the Johnnies were looking for a new coach, he jumped at the opportunity of coaching at the collegiate level.

“After coaching in high school for 2 years I wanted to coach at the collegiate level,” Daehn said. “I enjoyed high school, but I wanted to move into an advanced coaching level.”

As far as coming to Saint John’s, it was an easy choice.

“When looking for a program to join I wanted an established team with talent and a strong drive to be successful," Daehn said. "One of my assistants at Cooper was a SJU graduate and he mentioned his St. John’s experience.

"It is not your average state school and the school has some great history and traditions. I found myself drawn to the school because of its unique characteristics.”

Daehn has jumped right into his role, and there has been no period of easing into the new coach. He has run challenging, yet fun practices this year and wants to see the team mature into a championship caliber team.

His goals are simple.

“I want to see the program grow in terms of participation, graduates, and community involvement,” Daehn said. “On the field I want to finish the season better than the previous year.”

Coach Daehn began playing lacrosse when he was a freshman in high school, and played for the Robbinsdale Cooper High School as a defenseman from 1998-2001. While at Cooper, he was selected to be the team captain in 2000 and 2001. With the help of Daehn, Cooper won the Minnesota State High School Championship in 1999.

After high school, Daehn attended the University of Minnesota-Duluth and played lacrosse there. The team won the Upper Midwest Lacrosse League (UMLL) Championship in 2002, 2003 and 2004. During his time there, he was selected to be a captain in 2004 and 2005.

While at Duluth, he also played for the USA West team in 2003 and played lacrosse in Prague, Munich and Berlin.

While at the University of Minnesota-Duluth, he received a minor in coaching hockey and coached hockey for the Duluth East End Bantams where he was the Assistant Coach in 2005 and the Head Coach in 2006. Although he enjoys hockey, he would have liked to have minored in coaching lacrosse.

“At the time, lacrosse was not a sanctioned varsity sport and therefore I could not minor in it,” Daehn said.

That has not stopped him from coaching lacrosse, though.

Daehn has coached lacrosse since he was a senior in high school. He has been coaching grades 7th through 12th from summer leagues to the high school level in Brooklyn Park, Duluth East and Robbinsdale Cooper. He was also the Minnesota State University-Moorhead Assistant Coach/Defensive Coordinator in 2008.

He can now add “Saint John’s University – Head Coach” to his resume and he is eager to get down to business.

“I am excited to meet everyone who is and has been apart of this great program. I have met a great group of young men who have led this team through a tough period,” Daehn said. “I am available by email if any alumni or parents have any questions.”

The Saint John’s Lacrosse team is very proud and extremely excited to welcome Coach Derek Daehn to the Johnnie Lax family. We are looking forward to what we hope to be many successful years both on and off the lacrosse field.

Saint John’s will take on the North Dakota State University Bison on February 6th, 2009 at the Shattuck St. Mary’s Dome in Faribault, MN at 10:00 p.m. It will be the first game of the year for the Johnnies and their first game under Coach Daehn. 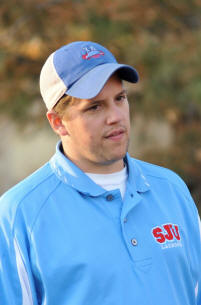